A GAME OF VIOLENCE AND LISTENING 2009 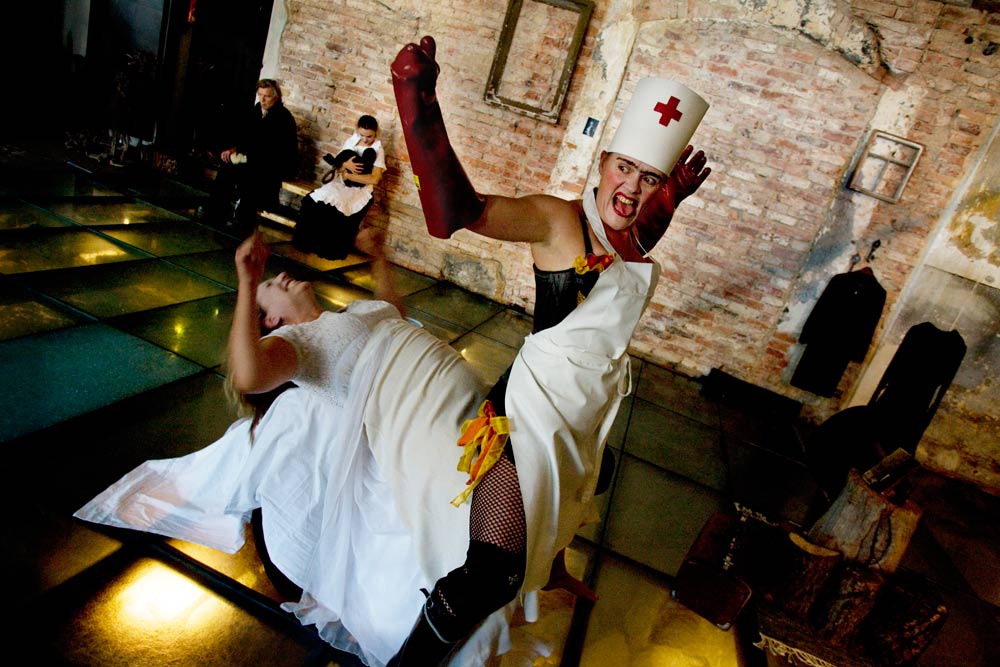 The Englishwoman Mary Wollstonecraft was one of the first feminist thinkers; the French Catholic priest Henri Gregoire one of the first anti-racists and opponents to slavery. Wollstonecraft’s most wellknown work is A Vindication of the Rights of Woman. The revolutionary and republican-minded Gregoire’s worked to ensure that the Act on the Abolishment of Slavery would enter into force in France in 1793. Wollstonecraft and Gregoire were contemporaries, living as they did at the end of the 18th century; but they never met each other.

At the beginning of the play, Maria, a young woman who lives in the present, enters upon a fictional journey into history, acquiring Zakarias Mieskonen as a companion. He is a soldier and organist and his career originates in the Finnnish War of 1809. Zakarias is curious as to what implications these events have for Finland and its fate in the oncoming upheavals of Europe. At the beginning, they arrive in late 18th-century London, where Mary Wollstonecraft gives birth to her second child. After the delivery Mary is taken ill with blood poisoning and lives for two more weeks only. During this time she narrates and relives her life, with her servant girl Marguerite as her audience.

The second act is set in the French countryside in 1794. Emily, who has escaped from the island of Saint-Domingue in the midst of a slave rebellion, meets Henri Gregoire in the little village of La Croix, where Gregoire is giving the Christmas Night mass. In the encounter between Emily and Gregoire there is a struggle of wills. Gregoire stays in the empty church with Jacques the bell-ringer and Madeleine, who makes clogs together with her husband, as his neighbours. This, together with the first act of the play, aims at exposing questions of equality and our relationship with the Enlightenment tradition from various perspectives.

In the third act Maria and Zakarias wander eastwards with a great army, and in the light of Zakarias’s experiences they reflect on the role of Finland in this age.
The play is also about our relation to history, the way in which we experience history, or what so-called microhistory is about – the individual’s perspective, the evidential power of details.